Sorry, there was an error in submitting your form, please check the fields and try again.

Philosophers through the ages from both the East and the West have asserted that we are all embarked upon a journey.  It is “a journey into oneself”[i] which we experience, from infancy onwards, as an innate and compelling drive to discover who we are and, moreover, who we can be.  This universal ‘Search for Self’ is often represented as a long, meandering pathway, an image that we find in the cultural artefacts of every human society.

The first mystics mapped the human development road as a sequence of five developmental stages of increasing wholeness, ascending from matter to life, to mind, to soul and ultimately to spirit.  Each dimension incorporates the components of its predecessor, and constitutes a new, higher – or more complex, more integrated, more differentiated – organisation.  This holarchy of developmental stages is captured in the medieval concept of the scala naturae or ‘The Great Chain of Being’[ii].  It is often illustrated as a nest of concentric spheres, and it forms the core of all the world’s wisdom traditions.

The Great Nest of Being 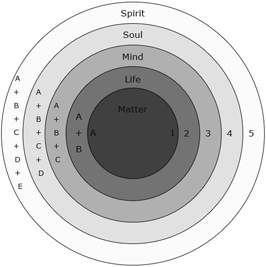 Many modern, orthodox researchers in the field of psychology have also studied the question of how our development unfolds, and their findings confirm the insights of the ancient philosophers.   Universally and cross-culturally, consciousness (or awareness) emerges in a sequence of distinct stages of self-identity and self-growth, each of which we must attain and incorporate into our sense of who we are, if we are to progress to the next one without compromise.  The theorists are also in agreement with the philosophers about the means by which consciousness emerges: it is by the agency of two fundamental capacities, transcendence and inclusion.  Initially, we identify or fuse with a stage of development but, over time, we discover that the strengths of this stage are, ultimately, its limitations, and so we work to differentiate from it and then incorporate it into our sense of Self, before moving on, if growth continues, to identify with a new, higher stage of development. 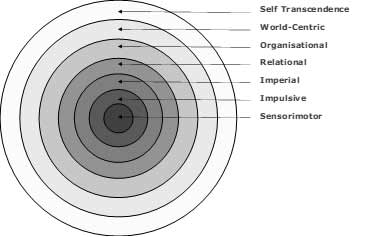 So the pathway along which we are all travelling has been a subject of contemplation and study for millennia.  In Finding Merlin: a handbook for the human development journey in our new organisational world (2012), I draw on the work of the modern researchers, including, in particular, that of the pre-eminent developmental psychologist, Robert Kegan (who, in turn, drew on the pioneering work of the epistemologist, Jean Piaget) to provide a simplified map of the human adventure.  It is a map which charts the seven most commonly experienced stages of the development road.  Our journey begins in infancy at the Sensorimotor stage.  There follows the Impulsive stage of early childhood, the Imperial stage of late childhood, the Relational stage of adolescence, and the Organisational stage of young adulthood, all of which most of us achieve.  Only a small percentage of us achieve the subsequent World-Centric stage; and the highest position, the Self-Transcendent stage (the realm of those frontier sages and mystics), is a very rare accomplishment indeed.

An Integral Model of Development 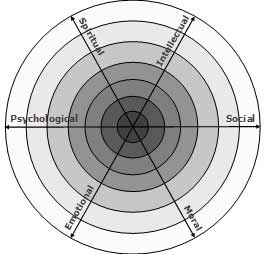 The sobering news for the traveller, however, is that, despite the abundance of diagrams and charts, the quest for self-development is not an easy one. The pathway, itself, is difficult and each stage of the journey provides its own set of challenges - intellectual, social, moral, emotional, psychological and even spiritual challenges – each of which we must overcome and also incorporate into our sense of who we are, if we are to progress to the next stage of our development as a fully integrated Self.  The social psychologist, Edgar Schein refers to these challenges as “issues to be confronted”, which we address by engaging in “specific tasks”[iii].  If, in our determination to press ahead, we choose not to confront them, we will arrive at our next destination with some of our potential unrealised, with an imbalance in our sphere of total capability.  And the further we travel along the pathway of growth, the greater the risk of such developmental gaps appearing, and these gaps will necessarily place limitations on us as we try to manage the ever-more complex circumstances and events of our organisational lives. To function as a fully integrated Self, therefore, we must seek out those stream-specific learning experiences which will enable us to attend to our particular challenges, and Peter Reason, an investigator in the practice of action research, offers us words of encouragement:

“…if you are clear with your intent and work as well as you are able towards it, the universe does seem to bring opportunities that can be seized.  The attitude needed is one of control and surrender, bringing discipline to the work while always watching for the unplanned opportunities that arise and being willing to go with them, riding the wave.” [iv]

[i] See The Journey as a Metaphor in Myth and Metaphor, Selected Essays 1974 – 1988 by Northrup Frye, edited by Robert D Denham, University of Virginia Press, Charlottesville, 2000, p221.[i]

[ii] See The Great Chain of Being by Arthur O Lovejoy, Transaction Publishers, New York and London, 2009, for a history of this idea (originally published in 1936 by Harvard University Press).